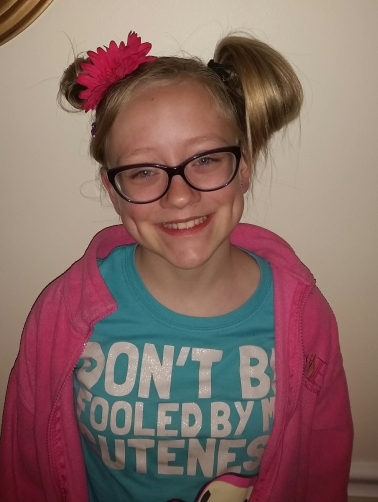 Every year I look forward to Crazy Hair Day for my girls school. However, every morning of crazy hair day my eldest, Thing 1, gets doubts and gets uber grumpy about me doing something “weird” to her hair. Thing 2 on the other hand is usually pretty cool and casual with it. She will allow me to do some of the “funner” “weird” things to her hair.

Thing 1 has a sort of fear of what others see of her. (She used to worry that other kids would see her band aide, if she got hurt.) Also, should her hair feel too loose or too tight or just felt like it was going to fall out or was too floppy… I could go on and on. It also doesn’t help that on one of those days of crazy hair day she ended up in the hospital with a high fever. (I am sure that is tied into her fear of crazy hair day, but she doesn’t think that is it)

Anyway, enough of that. I have figured out a way around her fears! I have been taking her to see the shows I work at for years now. Last year, I took her to see The Heart of Robin Hood. The little girl, and a few of the other cast members had a messy bun look going on for their costume. It was very similar to what I had wanted to do for her hair on Crazy hair day that year. But she wasn’t having it. Until, she saw that the girl could do the entire show with zero problems with her buns. Also, it helped that the girl looked super cute (in that messy way).

So, Thing 1 decided that she wanted me to do that for her hair this year. Also, she allowed me to do a few little embellishments. 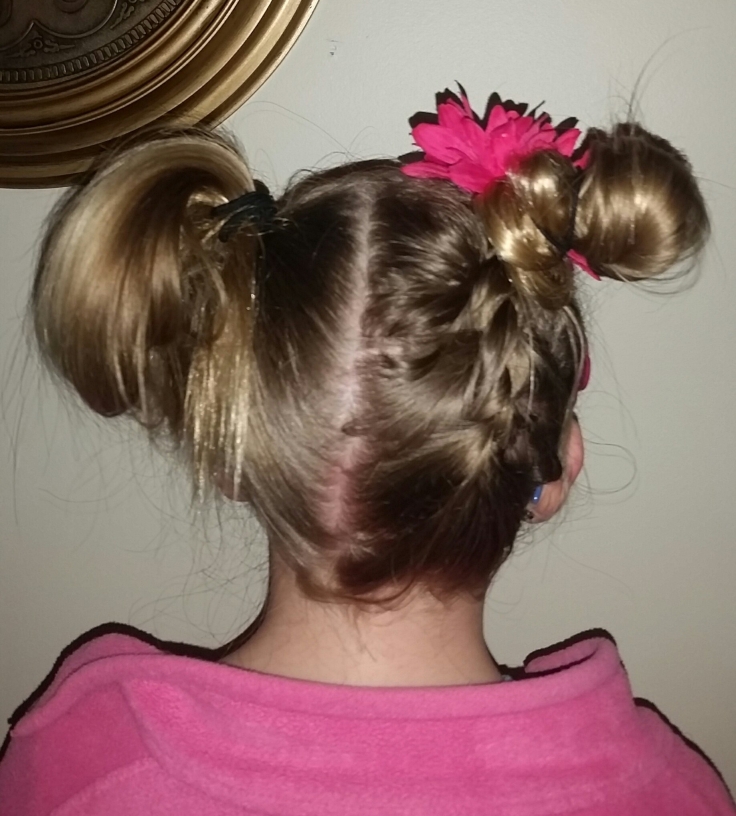 So I did an upside down dutch (ish) braid. (I am still working on that type of braid in my girl’s hair. It isn’t very good but it’s a work in progress) I did the braid up into a bun on the top of her head. I was going to do 2 of the same, and end up with twin messy braid buns on the top of her head. But, as I had separated the hair with one side being in a pig tail she decided that she wanted one messy bun and one pig tail!

After finishing the bun, I went to do a smooth sassy pig tail. While in the process, I asked her if she would be okay with a floppy “Dog Eared” pig tail. She agreed! And we then went on to embellish her up do with a flower and some clips to add some cute and crazy.

Thing 2, decided before she saw me that she wanted a nest of peeps in her hair. Thank heavens that Easter was just over a week ago! She is also very cool with whatever I want to do to make this happen. So I get to be a little more creative here!

So I tried to do a Crown Dutch Braid (trying to perfect my Dutch Braiding skills). Leaving some of the hair down so that I could pull it thru the braid helping things look more “nest-like”. She had already attached a ribbon to her Peep doll. So I pulled that through the braid tying it under her chin to help it sit in the nest.

Adding hair ties and clips and bobby pins where ever I wanted and they were needed to keep things in place and a bit messy. I attached the Eggs and such with bobby pins through the little holes in the eggs. (So you kind of need to make sure you buy plastic eggs that have holes in them already) At the end I added a barrette that was big enough and strong enough to hold onto the tail of the Peep Doll and keep it where I wanted it to stay. 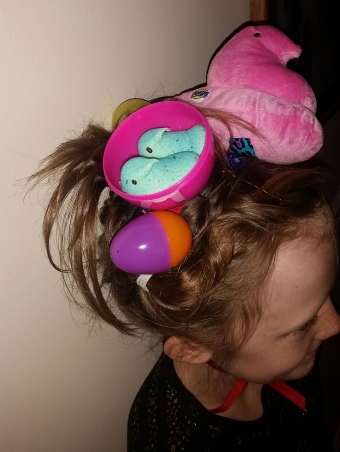