When we make the costumes I have them decide on the costume they want by the beginning of September each year so that I have at least 2 months to design and build the costumes.

In the summer of 2014 they decided that they wanted to be dragons. So I made them choose what type of dragon they wanted to be. I am a huge Pinterest fan so I searched to find all of the ways I could to build this costume for my girls. We decided that the best way would be to make a fancy Renaissance period type dress and incorporate that into our dragon designs.

In some dragon lore, dragons can change into human form so I went with that idea. Thing 1 wanted to be a Silver Dragon.  Thing 2 decided to be a White Dragon. I found a dress pattern that we liked and decided to try my hand at using a pattern. Up until this time I had never used a pattern, I just made them up myself. We went to the store and picked up the cloth that they wanted and a pattern for a dress.

The cloth on Thing 1’s dress is a mesh cloth with shiny stickers. Yes, those “scales” are actually just stickers, millions of sticky stickers. I had never encountered this problem when sewing. These stickers, stuck to my needle and thread on the machine! Now, how am I going to sew this mess! 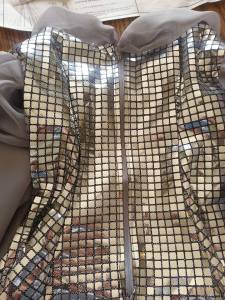 Luckily, I work in a Theatre at night. I went in to have a chat with the costumers in the costume department. To get their ideas on how to handle this problem, I also got a few tips from them about how to read and sew from this particular pattern. Their genius idea? Use tissue paper as a barrier between the cloth and the sewing machine! It was incredible how much this changed my process in finishing her dress.

We needed dragon wings! So I went for the sheer cloth look, and made belled sleeves. Instead of sleeves made from the same cloth as the dress.

I searched and searched, until I found what I could use and adapt to fit what I had in mind. We needed something that could attach to their waist and not hurt the work that I had already put into their dresses. I found this wonderful little tutorial. I used their basic form for the look that they wanted and just modified it to look like the shape of the tail I needed. Dragons have different styles of tails as well as wings and skin tone so I also looked around for what my girls wanted their tails to actually look like and I added that to the design.

Our Silver dragon needed a long sleek tail that had a diamond shaped tip. Fairly simple. I wrapped a diamond shaped cardboard cutout with the cloth for her dress, then wrapped that in the sheer cloth and sewed that to the tip of the tail. I needed batting to fill he Silver Dragon’s tail so we looked around the house to see what I had. I found that I had a huge stash of plastic grocery bags around my house so I decided to use those up and stuffed the tail with them. It made the tail feel and move a bit more realistically.

The tail hanging from upstairs railing.

With Thing 2’s White dragon tail we wanted it to be a shorter fluffier tail so we made this one more like the original design just turning it on it’s side, adding the detail that we decided on for her tail. We did have some batting to stuff this tail with. (If I were to do it over I would have used a little less batting in the white tail.) 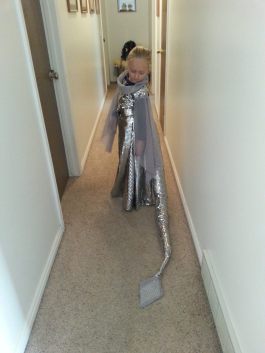 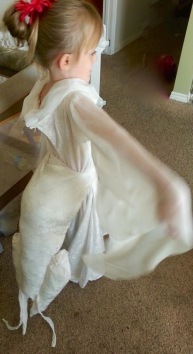 I realized that the tails where a bit too heavy to stay up without a little help so I attached some hook & eye clasps to the dress and to the tails at the back to help keep them together. I also attached these clasps down the tail and back of the dress to make the tail look like it was a part of the gown.  So that the separation that you see in the pictures above doesn’t happen.

Now, dragons typically have horns. What could I do for making my girls horns? How could I attach them to their heads? After scouring the internet, I just couldn’t find anything I liked. I decided to just take on this challenge. We found some soft plastic headbands at the store, some metal coat hangers, aluminum foil, painters tape, and spray paint.

I cut and shaped the wire hangers, attached the headbands and began to wrap this all in tin foil. 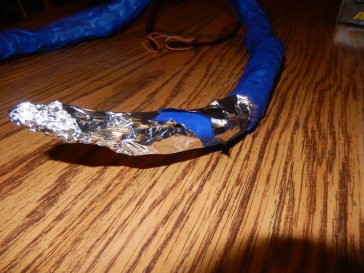 When the tin foil layer was done, I wrapped this all in the blue painters tape. After all the foil was covered completely, I took everything to the garage and began spray painting. 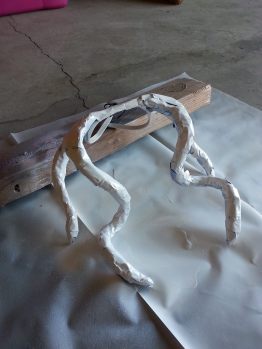 After making sure I couldn’t see any more blue, and a few coats of paint. I had my horns made for our dragons! We decided to make their horns sit on top of twin french braids that were attached at the end  and sprayed their hair with hair spray coloring to match their dresses.

We next need to figure out what to do to make their cute little faces look like dragons. I searched the internet again and found many ideas on how to make someone look like they had scales. I settled on the wig cap method.

I painted the base coat on their face, stretched a wig cap over their face and dusted their face with white powder makeup. Voila! Dragon scale masks. Now I wanted to do this only once on the day of Halloween, not before school, after school, and before partying. I asked my actor friends what they did to get their make up to stay looking pretty and lasting a long time. They gave me a few tips. I powdered with baby powder and I sprayed with a hairspray mixture that I bought at the costume supply shop. 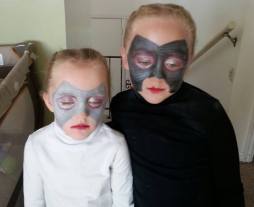 The above pics were taken before school 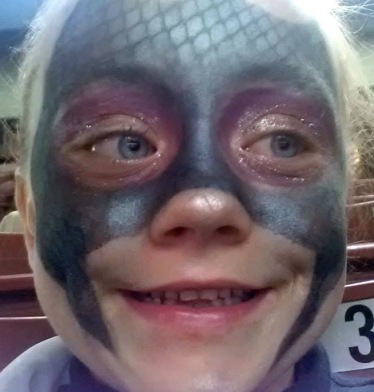 This was at the end of the night at a hockey game on Halloween. So I would say that the makeup lasted a surprisingly long time.

The Thing’s 1 and 2 had some pretty awesome costumes the Halloween of 2014.